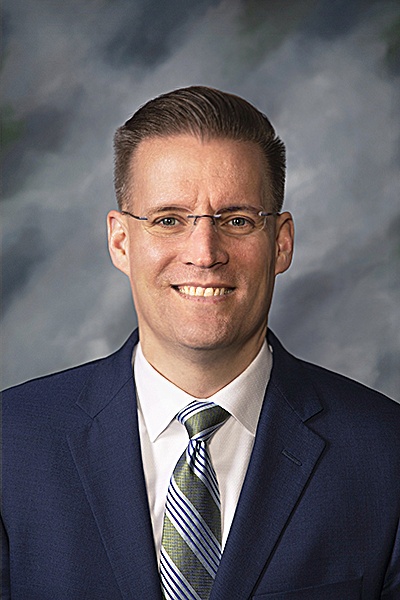 Mr. Evans is a partner with the law firm Forsberg & Evans, in Rexburg, Idaho. Mr. Evans focuses his practice on business law, wills and estates, property and contract disputes, family law and adoption cases, including custody, divorce, adoptions, and guardianships, government work, and has experience with handling a wide range of civil litigation.

Mr. Evans was born in Utah but primarily raised in southeastern Idaho. While in college and law school, he received two national awards for academics and competitions in which he was involved. One of his national awards was received on the top floor of the North Tower of the World Trade Center, just a few months before 9/11 occurred.

He served meritoriously in the Idaho Army National Guard as a Combat Engineer, Howitzer Crewmen, and Judge Advocate General’s Corps, and is an active volunteer for veteran services.

Upon completion of law school, he came to Rexburg in August 2001, where he began practicing law at a local law firm.

During September 2002, he joined the Madison County Prosecutor’s Office and carried the juvenile and misdemeanor caseloads, as well as handled a felony caseload. During November 2006, he discontinued criminal work and began doing the civil work for Madison County. This includes working with the Madison County Commissioners and the planning and zoning department. During February 2006, Mr. Evans joined Forsberg Law Offices, where he is a partner today.

Mr. Evans is a regular lecturer at Madison High School, BYU-Idaho, and at church and scouting groups. He was the legal instructor for the POST Detention Class #29, whose students were ultimately hired to run the Madison County Women’s Jail. He has been involved with the Idaho Law Foundation, Seventh District Bar Association where he served as a past President, and has served on the Board of Directors for the Family Crisis Center in Rexburg.

Mr. Evans enjoys the outdoors and is active in the motorsport’s community. He was once counted among a small number of people in Idaho who carried a professional motorcycle road racing license. He and his family can be found on the sand dunes or mountains during the summer on four-wheelers or motorcycles, and riding the mountain ridges during the winter on their snowmobiles.

While at Ricks he met and married his wife, Colleen. Bill and Colleen have six daughters and fourteen grandchildren.